Price of Tecno Camon 18 Premier in Pakistan is Rs. 54,999.
Price of Tecno in USD is $341.
Tecno Camon 18 Premier - Mid-Ranger Of The Tecno
Tecno is launching its all-new Camon 18 which has got a moniker Premier at the end. The Chinese company Tecno is working on the new smartphone, which was spotted on Google Play Console. The coming phone model number is TRCNO-CH9, and it will be called Tecno Camon 18 Premier. The smartphone will be empowered by a powerful chipset called Helio G96 SoC. This is one of the latest chipsets in the market, and to give more power to this Tecno's Camon 18 Premier it has an Octa-Core processor inside the handset. The handset has got AMOLED Touchscreen and there is a big screen size of 6.7 Inches, the users will enjoying using this screen size. The smartphone Tecno Camon 18's going to have a full HD plus resolution of 1080 x 2400 Pixels. Also in this device, there is a powerful GPU called Mali-G57 under the hood of this smartphone. The SoC of the smartphone paired with 8 gigabytes of RAM means that the upcoming smartphone Camon 18 Premier by Tecno is having to be very fast in its execution. The internal storage is 256 gigabytes which is enough to store a huge amount of data for future usage. The Tecno 18 Premier has got a Quad Camera setup. The main lens of the setup will be 64 megapixels along with 12 megapixels, and 2 megapixels, the lens to capture excellent photography. The front-facing of Tecno Camon's 18 Premier is loaded with a 32 megapixels front-selfie camera setup. The smartphone has got a fingerprint sensor to secure your data. The battery of the phone is also a massive one. The smartphone Camon 18 Premier is fueled with (Li-Po Non-removable), 4750 mAh battery to get enough backup time and the smartphone got a Fast charging. Now Samsung and other smartphone companies will be looking to bring features like 18 Premier. 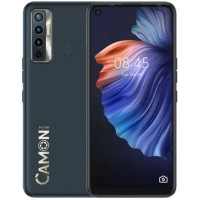