Nokia 3.2 - King of Entry Level Smartphones!
Popular brand Nokia announced new 3.2 for the world market so that it gonna fight with other entry level devices. This phone is big threat for other companies like Samsung, Huawei and Oppo. Nokia 3.2 is powered with so many new features which we gonna discuss here. It carries big screen of 6.2 inches which has 79.0% screen to body ratio with 271 pixel density. Nokia 3.2 has a U shaped notch on the screen in which the selfie camera is engraved, an unusually located LED indicator at the end and a dedicated button for call Google Assistant. Nokia 3.2's got fingerprint scanner at the back, a front-end face recognition feature and Android Pie using Android One with guaranteed years of Android updates and three years for security updates. Nokia latest 3.2 comes with the Qualcomm SDM429 Snapdragon 429 chipset which provides it amazing speed to stand against all types of processing in the phone and also gave solid stage for Octa-Core CPU of 3.2 which has the clocking speed of 1.8 GHz. Mali Adreno 504 GPU has full control to handle the graphical performance of the phone. 2 GB of RAM is running all the apps of 3.2 smoothly and protects the smartphone from hanging. Internal memory of the device is 16 GB which is too low, but dont worry because it has a 400 GB memory card slot option also. 3.2 is also available in 3GB of RAM and 32 GB of internal storage, so if you want more power in your gadget than you can choose the bigger version of 3.2 by Nokia. Fingerprint sensor is there on the board which make this device safe from thieves. 13 MP camera is available on back side that is armed with LED Flash while Nokia has hired 5 MP camera for front side of 3.2. It has Dual SIM slots which supports 3G and 4G LTE connectivity so that you can connect with your loving ones at any time. For music lovers there is an audio output of 3.5 mm in Nokia 3.2. It is also worth noting that it is equipped with a GPS-receiver, which will allow you not to get lost in any place. 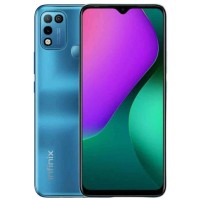 Infinix Hot 10 Play - The Mid-Range MasterInfinix has unveiled its upcoming Hot 10 that has got a mo..