Nokia 130 - The Portable Video & Music Player.
Microsoft brings you the Nokia 130. A portable video and music player in a very economical price. Nokia's 130 shows that Microsoft devices has still not abandoned the idea of producing basic phones. 130 by Nokia carries a familiar candybar design and is available in three popular colours: Black, White and amazing Red. Nokia 130's integrated FM Radio will not let you get bored, together with a Video player, MP3 player and microSD card support up to 32 GB, Nokia model 130 can hold up to 6000 songs. Supporting bluetooth connectivity with the slam features, earphone & other accessories are also compatible. And if that's not enough Nokia 130 also offers a share button so that you can quickly share the photos or the required documents. Nokia has made 130 available in 2 different versions Dual-SIM and single sim with a battery that can sustain continuous 46 hours of music playback. Nokias 130 is a complete leisure machine with fairly large speakers and there's also a flashlight to kill the darkness. 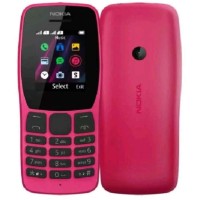 Nokia 110 - A New BarphoneTech giant Nokia has introduced the 110 models. This feature phone has got..